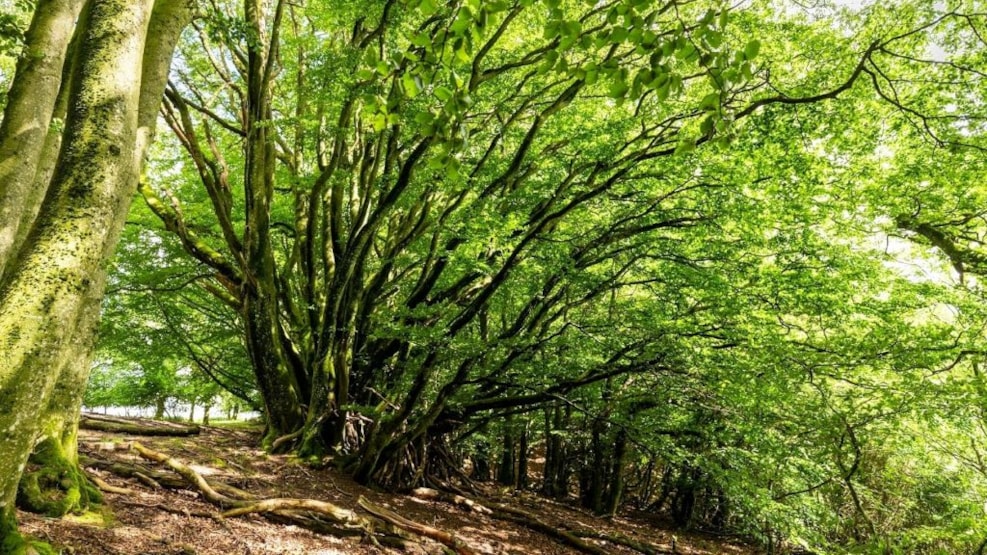 Rold Forest is Denmark's largest connected forest, covering an area of 8.600 ha. The forest is comprised of several forests, such as Hesselholt, Nørreskov, Nørlund Skov and Rold Vesterskov. Combined, the area is called Rold Skov.

Three large estates own 75% of the forest, while the remaining 25% is administered by The Danish Nature Agency.

The trees of Rold Forest

Rold Forest is primarily coniferous forest. The sandy and gravelly moraine earth, combined with heavy rainfall, makes the area very suitable for the coniferous trees. The forest is known for its large and dense stand of old spruce, unfortunately, a storm in 1981 heavily thinned them out.

Since 1850 many different species of coniferous trees have been planted. Besides common spruce and scots pine, several North American wood species have been planted, such as Douglas fir, Sitka spruce, noble fir and giant fir.
The story goes that a forester wanted to plant the various trees, but his supervisor prohibited him from doing so. Nevertheless, the forester planted the trees anyway, which we can appreciate today. The trees have become an important part of the forest. If you want to see these impressive old giants, visit 'Jætternes Baghave', known as ‘Garden of the Giants’ in English. It is located in Hesselholt Skov, close to Store Økssø.

While Rold Forest primarily consists of coniferous trees, an effort was made to safeguard some of the old, picturesque beech forest in the area. The largest stand of old-growth beech forest can be found in Rebild Bakker, the troll forest and the Old-growth Forest. In Rebild Bakker and in the troll forest, some of the beech trees have multiple stems and are twisted and crooked. Much of the older beech forest in Rold Skov is left as untouched forest, meaning that no trees are cut down and self-seeded trees are left to grow. Moreover, if a tree dies or falls, it will be left as it is.

The forest garden of Jutland was opened to the public in 1970. Here you can find more than 150 different species of trees and bushes from all over the northern hemisphere.

The unique geology and nature of Rold Forest

In Rold Forest you can experience an unusual geological phenomenon, known as sinkholes. The sinkholes are created when the rainwater seeps through the forest ground, which makes the water acidic. The acidic rainwater then seeps through cracks in the limestone, slowly dissolving the limestone, creating a cavity which grows larger as time passes. The sinkhole is formed when the surface layer finally collapses. Smaller sinkholes of 4-5 meters are quite common, especially in Nørreskoven, located north of Rebild. Hestegraven is one of the more famous and sizable sinkholes in the area. The name comes from an old tale, in which a horse-drawn carriage suddenly disappears into a hole in the ground. Another well-known sinkhole is the one called Røverstuen. Here, the story goes that the robbers from Rold used the sinkhole as a hide-out, laying in wait for travellers passing by.

Aside from the interesting geology, Rold Forest also has fascinating flora and fauna. In the forest you can find the very rare Lady Slipper Orchid, blue anemone and red helleborine. Furthermore, the forest is home to an abundance of wildlife, such as foxes, badgers, red deer, bats and birds. The flora and fauna of the forest can be experienced throughout the year.

In the Rold Forest area, there are a wide number of marked trails. Some of the most popular trails is the Rebild Bakker Rute and Den Gastronomiske kvalitetssti.

Download a map of Rold Forest hiking trails here. OBS. the map is only in Danish.

Rold Forest is a great place for mountain biking. You can find a map with mountain bike trails here. Make sure to follow the guidelines and only bike on trails appropriate for your level. OBS. the map is only in Danish.

The history of Rold Skov

The northern and southern part of the forest has a rich history, dating back to the Neolithic Age and the Bronze Age. Burial mounds and dolmen from these periods can be found in all parts of the forest, however, the highest concentration can be found around Bjergeskoven which is found north of Rebild. Some of the most impressive burial mounds are located here, such as Stenstuen and the two Bronze age mounds Svinehøjene.

In the forest you can find several old sunken lanes. Sunken lanes start as normal roads at ground level, but over time the roads are eroded away by centuries of use, creating a ditch in the landscape. When one road became too troublesome to use, a new road was made. The best known sunken lane in the area is Hulvejen, the road leading up to the tourist office RebildPorten.

Everywhere in the forest, you can find signs of charcoal making from the past. The extensive scale of charcoal making in Rold Forest required large quantities of wood and contributed to a significant reduction of the forest. Today, only one charcoal burner guild exists. They make charcoal once a year, where the public is invited to watch and participate.