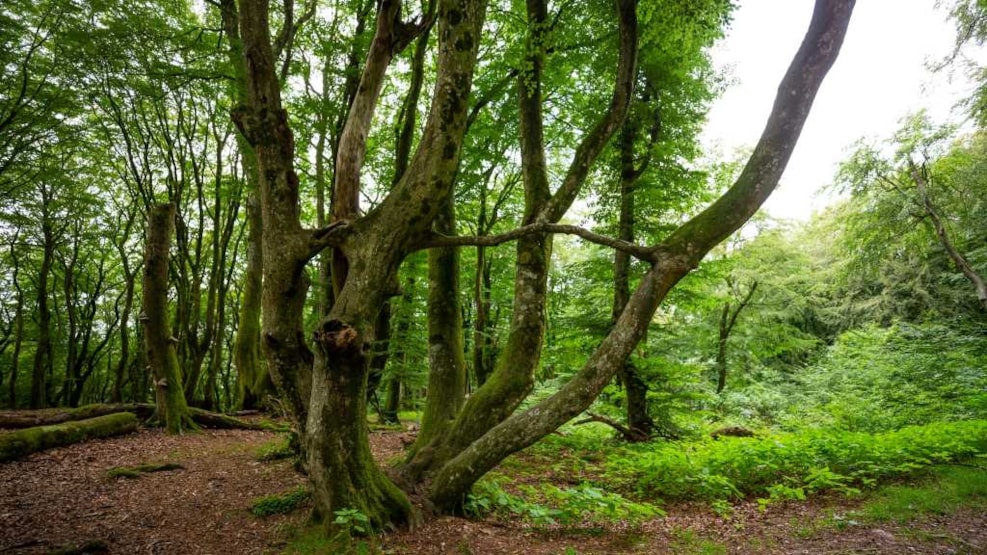 The name Troldeskoven, which literally means the Troll Forest, was given its name because of the shapes of the trees here.  The forest is also known as the Magic Forest because of its magic “troll” trees. It is located in 'Vælderskov', and is number 17 on the Rebild Bakker map.

History of the Troll Forest

The gnarly and twisted old beeches of the Troll forest have become iconic of Rold Forest and are a remarkable sight. Most of the beeches have multiple stems, due to their origin and their growth conditions. The beech trees here are direct descendants of the first beeches which were brought to Denmark, around the early middle ages. The oldest trees in the trolls forest are more than 300 years old, which is close to the maximum age a beech tree can reach.

The beech trees have a special ability, where when the trees are cut down, they send out new shoots from the stub and root. In time, the shoots develop into stems, meaning that some trees might have up to 20-30 trunks; all belonging to one tree. The feature has been exploited over centuries, as locals could harvest the trees again and again, without having to plant a new one.
This special characteristic can be found in other beech trees in Northern Jutland as well.

Sometimes, the stems grow together forming what is called an 'eye tree'. According to the legend, you can cure rickets (vitamin D deficiency) if you crawl through an eye tree. In 1952, Queen Margrethe of Denmark and her sisters crawled through an eye tree in Rold Forest, which is now nicknamed 'The princess tree'.