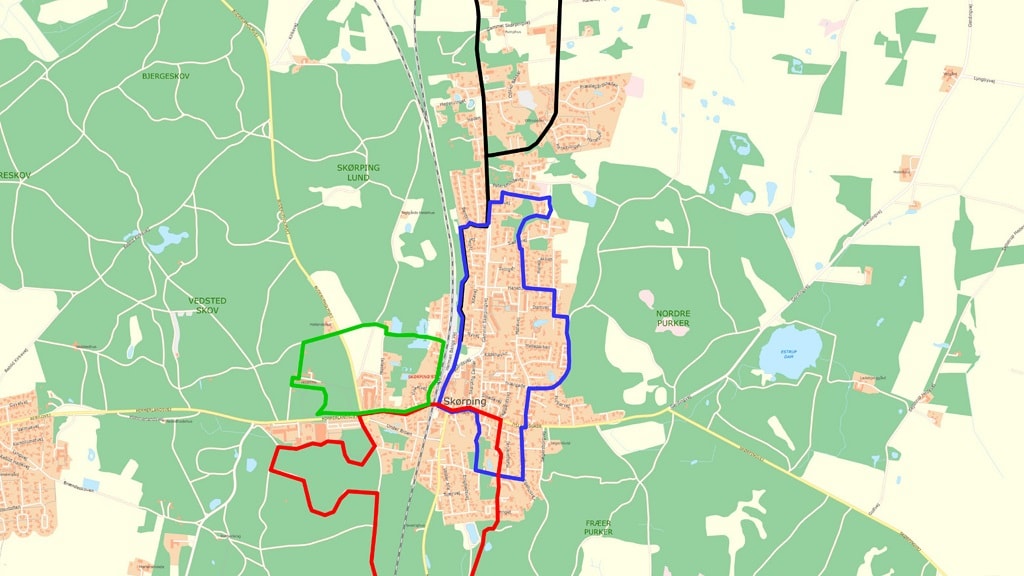 The Clover paths in Skørping

The four paths in Skørping will take you on interesting and beautiful paths. At this site, you can see a short description of the four routes, as the brochures and maps are only provided in Danish. All routes starts at the Kulturstationen (the culture station) in Skørping. You can find the map here.

You can also see the Danish search words to use for the Endomondo-app, where you can follow each route. All four routes has been tracked via Endomondo, which makes it easy for you to follow the route, as it only requires a phone and the app.

This route, at the western side of Skørping, will take you through the forest to the Sanatorium, which is now a private hospital, and back to the culture station in Skørping. On this route, you will have also passed the old bog that provided peat for the town and the Sanatorium, the Yellow Scout’s cabins, and Hollandshus. Hollandshus was the first location in Denmark where an engagement between the Germans and a group off freedom fighters took place. One freedom fighter was killed, and another captured and later executed, and their death caused a riot and Denmark was declared a state of emergency. The Sanatorium was built in 1904 and functioned as a Tuberculosis Sanatorium until it because Skørping Hospital and later became a private hospital.

This route will take you pass the Hanehøj-area. This area is named after a burial mound north east of Skørping. This area was given to Skørping municipality in 1963 by the butcher Pedersen and his wife in memory of their son Peter, who, tragically, was killed in a car accident. The area may only be used for recreational purposes, and the area is beautiful. The route will also pass the church “Skørping Nykirke, from 1914, which looks like an old village church. However, when you enter the church you will see a beautiful altarpiece, a large and beautiful painted glass by the Artist Trondur Patursson from the Faroe Islands.

This route takes you pass by Skørping Church where you can see the Helligkorskilden (Holy Cross Spring). This used to be a spring that was known for its healing effect, and markets where held by the spring. Today, the spring has dried out. The route will pass the town and take you through open land. You will pass Skørping waterworks and the Hanehøj burial mound. From here you can experience a beautiful view to all sides. On the way back to the start at the Kulturstationen (the culture station), you will pass the Skørping riding school.

You could also bike or drive at some parts of the route if you think the walk is too far.

This route is only partially marked as a part of the route take you through forest that is administered by the Danish Nature Agency, and at this part there will be no marks. Therefore, this route can only be followed by maps or using the app Endomondo, where all the routes has been tracked. This route will take you under the railway to the sports area. You will also pass the school’s nature base, where you can enjoy your own coffee or food made on the bon fire – but remember that you must always clean up before you leave. From here the route takes you into the forest to the lake Bregnesøen. After the lake, you will walk under the railway again, and this road takes you to the church Skørping Nykirke, which you also meet on the blue route. After the church, the route will take you to the starting point.